The nation’s top health official made an appeal Monday morning for the preservation of the Affordable Care Act, insisting that the sprawling health-care law that President-elect Donald Trump is vowing to eliminate is “now woven into the fabric of our nation.”

Health and Human Services Secretary Sylvia Mathews Burwell delivered the most extensive remarks of any Obama administration official since last week’s election about the future of the law, suggesting that large numbers of Americans signing up now for ACA health plans will make it more difficult for Trump and congressional Republicans to take away that insurance or the federal subsidies that help pay for it. 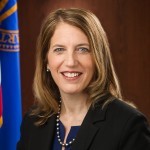 Burwell’s remarks transformed what would have been a routine enrollment-period briefing — for people who assist consumers in signing up for coverage and sympathetic bloggers in target markets — into a plea for the salvation of President Obama‘s signature domestic achievement.

Speaking in an auditorium of the White House’s Eisenhower Executive Office Building, the HHS secretary called last week “tough for many of us.” And in a moment of sentimentality rare for her public remarks, she noted, “History has taken place in these halls — major treaties have been negotiated, budget deals have been hammered out, and the future of our nation has been shaped by men and women working here.” She pointed out that Obama signed the ACA “not far from here — in the East Room — about six years and eight months ago.”

Burwell ticked off her customary list of the benefits she often says the health-care law has conferred on consumers and on the rate of cost increases in the U.S. health-care system. She noted that 20 million people now have insurance through ACA health plans or an expansion of Medicaid in 31 states and the District. Insurers are now forbidden to charge higher prices to women, place yearly or lifetime limits on coverage, or refuse to cover people who have pre-existing medical problems.