Customer satisfaction with banks, and life and health insurers is up, while the property and casualty insurance industry experienced a decline in satisfaction, according to the American Customer Satisfaction Index (ACSI).

The ACSI is a national research organization created in 1994 by researches at the University of Michigan.

The health insurance industry improves 4.3% to 72 as all major providers post gains. Large boosts for Aetna and Anthem lift the two companies into a tie for first place at 75. Kaiser Permanente is up 4% to 74, followed by the group of smaller insurers at 73. Humana (+1% to 72) matches the industry average, while Blue Cross and Blue Shield comes in just below at 71. UnitedHealth advances 6% to 70, and Cigna, despite improving the most, comes in last place at 67.

Property and casualty insurance is the only category in the sector to decline, down 1.3% to 78. Waning customer satisfaction for the industry is the result of a 5-percent fall for smaller insurers. Many of the largest insurers, however, improve. AAA takes the lead, up 8% to 81. Nationwide increases by 5% to 79, GEICO inches up 1% to tie the industry average at 78, and the rest of the industry clusters below at 77. The exception is Farm Bureau, moving in the opposite direction and falling 8% to last place at 74. 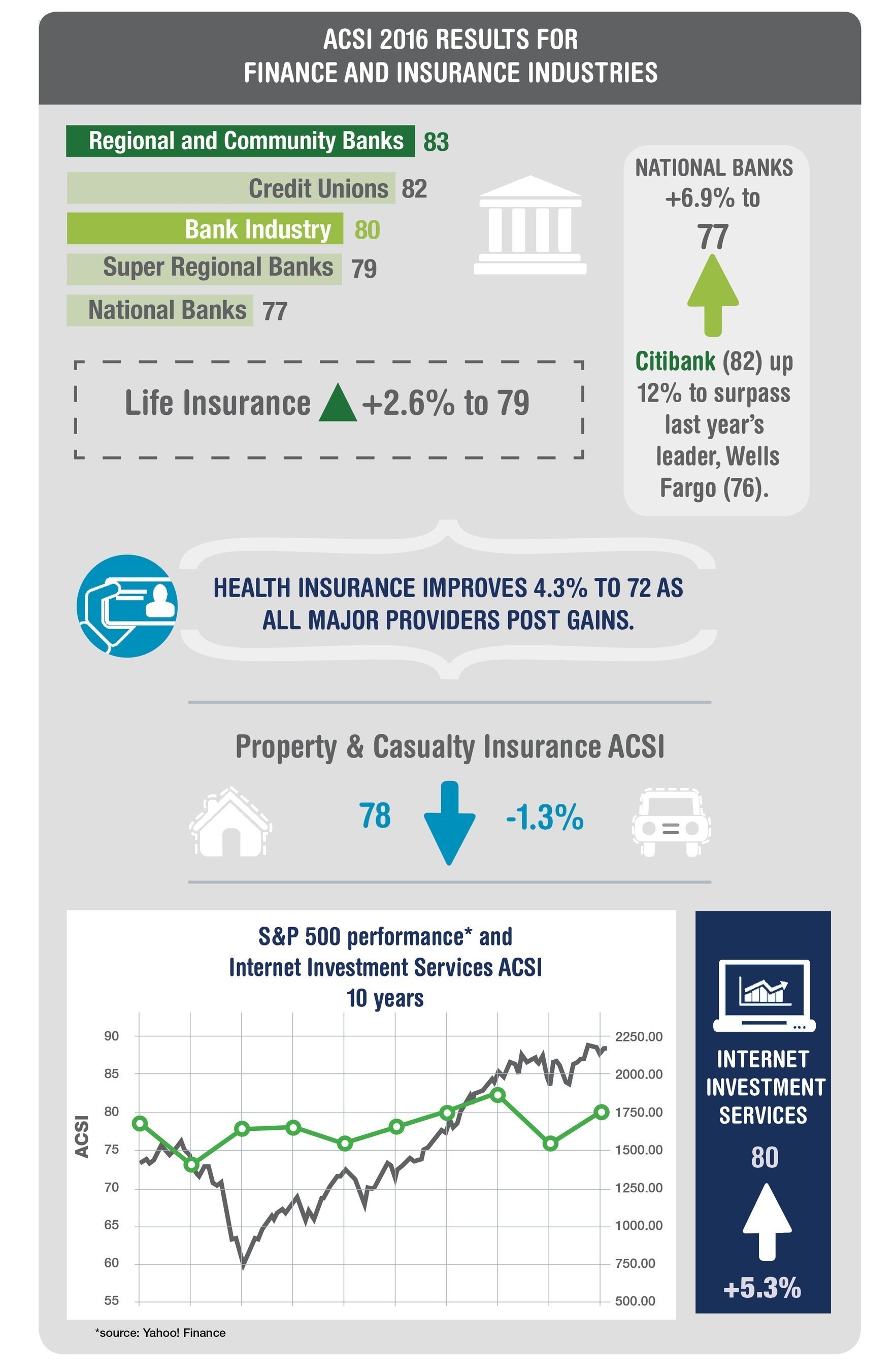 Policyholder satisfaction with life insurance is up 2.6% to an ACSI score of 79. Allstate and New York Life overtake last year’s leader Thrivent to tie for first place at 82. Mutual of Omaha rises 7% to 81, matching Thrivent (-1%). Farmers surges 13% to 80, followed by Northwestern Mutual, State Farm and the combined score of all other smaller insurers at 79. Prudential (unchanged at 77) comes in higher than Lincoln Financial and MetLife (both 76). Besides Thrivent, Primerica is the only other life insurance provider to drop, losing 7% to 75.

Internet investment services overall jump 5.3% to an ACSI score of 80. All of the large internet investment brokerages register customer satisfaction gains this year. Scottrade leads the category with an ACSI score of 83, up 5%. Four companies tie at 81 for second place: Charles Schwab (+4%), Edward Jones (+4%), Fidelity (+5%), and Vanguard (+1%). E*Trade is up 8% to 80, followed by the group of smaller brokers (+4%) and Merrill Edge (+8%) at 79. TD Ameritrade rises 7%, but remains in last place at 78.

Bank customer satisfaction climbs 5.3% to an ACSI score of 80 on a 100-point scale. Regional and community banks lead with a combined score of 83 (+3.8%). Super regional banks gain 3.9% to 79. Although national banks rank lowest, they are the most improved (+6.9% to 77). Credit unions edge up 1.2% to 82, slightly below the industry’s long-term average. Similar to smaller banks, credit unions offer more personalized service, and also are generally more likely to have lower fees and free checking.

“Smaller usually means higher customer satisfaction when it comes to banking services, and that still holds true albeit to a lesser degree this year,” says Claes Fornell, ACSI founder and Chairman. “ACSI data show that national banks have improved in nearly every aspect of the customer experience. But even with some of their highest scores ever, national banks still lag regional banks.”

Citibank leads among national banks with a 12-percent jump to an ACSI score of 82. Wells Fargo loses the top spot by improving the least, adding just 1% to 76, and is now below average as the other national banks post greater gains. Bank of America (+10%) and Chase (+6 %) at 75 are closing in on Wells Fargo. Stock performance has followed suit. Since February, Chase, Citibank and Bank of America have each shown solid gains, whereas Wells Fargo’s stock lagged its national competitors even before news of improper sales practices broke.

The ACSI report, which is based on 9,608 customer surveys collected in the third quarter of 2016, is available for download by completing a form here.