Trump, GOP to seek repeal of Obamacare in first 100 days

President-elect Donald Trump has called for a repeal of the Affordable Care Act as one of his first major initiatives when he takes office in January, with supporters backing him but challengers in the wings.

“Our top priority is to repeal Obamacare in the first 100 days,” New York Republican Representative Chris Collins, a leading Trump ally in Congress, told CNN on the morning after Trump’s election victory.

Trump will enjoy Republican majorities in both chambers of Congress, but a long-term romance with Capitol Hill may be more challenging.

Under normal circumstances, a president whose party controls both the Senate and House of Representatives can count on getting things done fairly quickly. Trump will likely not be an exception, but he does have some challenges.

Many fellow Republicans in Congress only backed Trump after he became the nominee, and some never gave him their support.

House Speaker Paul Ryan of Wisconsin would not endorse the de facto leader of his party, telling representatives to support the candidate who would best serve their constituency.

Trump and the Republican leadership in Congress agree on at least one major policy: They have said they want to repeal Democratic President Barack Obama‘s landmark health insurance law. 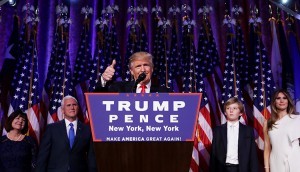 Senate Majority Leader Mitch McConnell, who ran in his reelection campaign on a repeal of the ACA, told supporters the day after his election that he would not, in fact, seek repeal of the unpopular law.

Many predict that a full-scale elimination is not possible, but that measured reforms could prevent further erosion of the health insurance industry.

America’s Health Insurance Plans (AHIP), a trade association that represents major health insurers, said in a statement late Tuesday that it would work with any new administration on the issue.

“We will work across the aisle – with every policymaker and the new administration – to find solutions,” AHIP said in the statement.

Trump has called the ACA a “disaster” and vowed to repeal and replace it. House Republicans have already voted more than 50 times to repeal all or part of the law, to no avail.

Senate Democrats will likely fight a rollback of ACA, but could face a fierce battle against Republicans with Trump’s cooperation.

certain to fight an Obamacare rollback, but could be outmaneuvered by Republicans at the procedural level with Trump’s cooperation.

Democrats shut Republicans out of the drafting and passage of the ACA when it became the law of the land in 2010. Some vow to not work with Republicans even as it is likely to face some changes.

“It would be a tragedy, and I certainly won’t in any way cooperate or work with an effort to take health insurance away,” Senator Angus King, a Maine independent who caucuses with Democrats, told CNN.