Six years into building its business around the Affordable Care Act, the nation’s $3 trillion health care industry may be losing that political playbook.

Following the election of Donald J. Trump as the next U.S. president, many health industry leaders say they are unprepared for Republicans’ plans to “repeal and replace” Obamacare.

In addition, Trump’s vague and sometimes conflicting statements on health policy have left industry officials guessing as to the details of any substitute for the federal health law.

“It will be repealed and replaced,” Trump said in a Nov. 13 interview on CBS’ “60 Minutes.” At the same time, he vowed to preserve popular provisions of the law like ensuring that people with preexisting conditions can get insurance and allowing young adults to stay on their parents’ health plans.

Charles (Chip) Kahn, chief executive of the Federation of American Hospitals, said that before the election, health groups had not been meeting with Republicans about a rewrite of the law “because the working assumption was we had a program that wasn’t going anywhere. That working assumption is now no longer operative.” 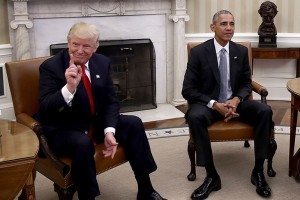 Upending the health law plays havoc with a health industry that had invested heavily in strategies geared to the ACA’s financial incentives. The flipped script initially left some industry groups speechless. Others issued bland statements pledging cooperation with the next administration as they awaited greater clarity from the next president.

Said Donald Crane, who heads CAPG, a national trade group for physician organizations: “Nobody was ready for this. We didn’t have a Plan B.”

The results appear to have rattled the fragile industry coalition that the Obama administration carefully crafted to support the law. Looking ahead, some health sectors might have even more reason to worry.

The hospital industry may be the most vulnerable to proposed changes, which could result in millions of Americans losing health coverage, both through the insurance exchanges and expansion in the Medicaid program for those with lower incomes.

Hospitals cut a deal with a Democrat-controlled Congress and the Obama administration in 2009, when the Affordable Care Act was being drafted. They agreed to substantial cuts in Medicare and Medicaid reimbursement, anticipating that those cuts would be offset by increases in paying customers who were newly insured.

“If you’re a hospital, you’ve sort of made this deal that you’re going to get more coverage [so you] accepted Medicare cuts,” said Dean Rosen, a longtime Republican congressional staffer who now represents hospital, insurance and other health interests in Washington. “What’s going to happen now?”

If expanded coverage under Obamacare goes away, said Kahn, then those cuts should be restored, “because those were done with the notion that uninsured people were going to have coverage.”

Other sectors of the industry appear either at somewhat less risk, or could even come out ahead under Trump and a Republican Congress.

While the pharmaceutical industry would stand to lose paying customers if the law was changed in a way that people lose insurance coverage, it could actually be a winner under a Republican president and Congress. That’s because the industry will be less at risk of the price controls that Democrats were vowing to try to impose. Trump mentioned drug prices a few times on the campaign trail, but references to drug pricing are not on the health agenda outlined on the transition website.

Insurers express mixed feelings about a potential repeal. The government-run exchanges where consumers can purchase federally subsidized coverage are a key pillar of Obamacare. But many insurers have complained about losing money in those marketplaces because too many sick people are signing up and healthier consumers are sitting out.

Some industry executives predict that the exchanges will be curtailed and Republicans will try to shift some of that coverage to state Medicaid programs. One of the biggest growth opportunities for insurers under Obamacare has been the expansion of Medicaid managed-care contracts under which private firms take responsibility for a large group of low-income enrollees for a fixed amount of money.

That privatization of Medicaid could accelerate under the Trump administration, some experts predict.

“Whether it’s Medicaid managed care or the private insurance model, these companies get their money either way,” said Paul Ginsburg, a health economist and professor at the University of Southern California. “I don’t see much of a threat to insurers.”

The picture is even rosier considering the insurance industry dodged a debate about a government-run public option, backed by Democratic presidential nominee Hillary Clinton, that would have competed directly against private health plans.

The proposed changes extend beyond the health law. Many insurers expect Republicans to champion an expansion of privately run Medicare Advantage plans. These alternative plans often offer additional health benefits not covered by traditional Medicare, but they were targeted in the health law for cutbacks because back then they were more expensive to the government than traditional Medicare.

“Medicare Advantage is poised to be the big winner consistent with Republican support of privatizing Medicare,” said Ana Gupte, a health care analyst at Leerink Research.

Nothing on health care is bound to change right away. Republicans have promised to put their early focus on the health law, but even with a quick vote on repealing major parts of it, they are expected to set a lengthy transition period that keeps the current framework in place while a replacement plan is developed. At that point, Republicans will encounter many of the tough choices Democrats struggled with while writing the landmark 2010 health law. They spent more than two years trying to craft intricate compromises among industry leaders.

“The Republicans will face the same issues as the architects of the Affordable Care Act,” said Crane. “How do we fund it? Whose scalp do you take? And how do you get the most people covered for the lowest cost at the highest quality?”

Jeff Goldsmith, a health industry consultant in Charlottesville, Va., said the Republicans are “starting from zero in dealing with this. They have no idea about the subtleties.”

Some industry leaders are encouraged that Trump has softened his talk of “repeal and replace” and seems open to keeping at least some of the provisions of the health law.

Bernard Tyson, CEO of Kaiser Permanente, a large health system and insurer based in Oakland, Calif., took some comfort from Trump’s own words.

He “said no one in this country should suffer unnecessarily because they can’t afford health care. That tells me we have room to work here,” Tyson said. “I believe when they get under the hood of the Affordable Care Act, I think we may start to see and hear different conversations.”

Ginsburg predicts that Trump might apply his marketing skills to health reform.

“If you really want to continue with 20 million people having coverage,” Ginsburg said, “it will kind of look like the Affordable Care Act. There will be rebranding, but a lot of the elements will remain.”